The District of Paro

Paro valley extends from the confluence of the Paro Chhu and the Wang Chhu rivers at Chuzom up to Mt. Jomolhari at the Tibetan border to the North. This picturesque region is one of the widest valleys in the kingdom and is covered in fertile rice fields and has a beautiful, crystalline river meandering down the valley.

Accentuating the natural beauty are the elegant, traditional-style houses that dot the valley and surrounding hills. One of the distinctive features of Paro town is that it is situated in a flat valley bottom and follows a grid-like pattern. The central plaza is adorned with a large prayer wheel and a small amphitheater where events are held throughout the year.

There are over 155 temples and monasteries in the area, some dating as far back as the 14th century. The country’s first and only international airport is also located in the region. Its close proximity to the historical and religious sites in the region has resulted in the development of an array of luxurious, high-end tourist resorts making Paro one of the main destination for visitors.

The region contains one of Bhutan’s most iconic landmark, Taktsang Monastery, the Tiger’s Nest. This awe-inspiring temple was constructed upon a sheer cliff face, above forests of oak and rhododendrons. The national museum, Ta Dzong, is also set in Paro. An ancient watchtower that displays hundreds of ancient Bhutanese artefacts and artwork including traditional costumes, armour, weaponry and handcrafted implements for daily life. The collection at the National Museum preserves a snap-shot of the rich cultural traditions of the country. Another site worth visiting in Paro is Drugyel Dzong or The Fortress of the Victorious Bhutanese. It was constructed by Zhabdrung Ngawang Namgyal in 1646 to commemorate his victory over marauding Tibetan armies. The fortress was destroyed by fire in 1951 but the ruins remain an impressive and imposing sight. 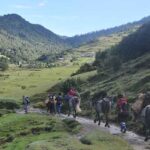 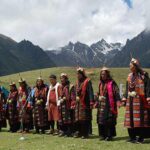 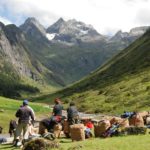 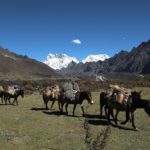 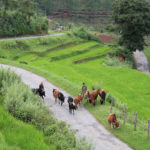 View All Tours To Paro – Tours to Paro may include trips to other regions as well since Paro is the only port of entry by Air.

Things to do in Paro

Places of interests in and around Paro, Bhutan

The National Museum of Bhutan is located in Paro just above the Rinpung Dzong (administrative headquarter of Paro district) was established in 1968. It is housed in an ancient watch tower called Paro Ta Dzong (Ta Dzong means “watch tower fortress”) built in 1649. It displays hundreds of ancient Bhutanese artifacts and artworks including traditional costumes, armour, weaponry and handcrafted implements for daily life. The collection at the National Museum preserves a snap-shot of the rich cultural traditions of the country.

Paro Rinpung Dzong – The Fortress of the Heap of Jewels

Paro Rinpung Dzong (Rinpung Dzong means “fortress of the heap of jewels”) was built by Zhabdrung Ngawang Namgyel in 1646 and established as the administrative and monastic centre of the western region. Today, the Dzong serves as the office of the governor of Paro district and head of the district monk body in Paro.

A great annual festival known as Paro Tsechu is held in Rinpung Dzong from the eleventh to the fifteenth day of the second month of the traditional Bhutanese lunar calendar (usually in March or April of the Western calendar). On this occasion, holy images are taken in a procession followed by a series of traditional mask dances conveying religious stories which are performed by monks for five days.

Taktsang monastery is located on a sheer 800-meter rocky cliff in Paro. It normally takes about 2 hours to reach the monastery from the nearest road point. It is the most popular tourist attraction in Bhutan.

Taktsang, or the Tiger’s Lair (people prefer to call Tiger’s Nest), is regarded as one of the most important monasteries in Bhutan. Its history is associated with the visit of Guru Padmasambhava (known as Guru Rinpoche), the Indian saint who came to Bhutan and introduced Tantric Buddhism in the 8th century A.D. It is believed that Guru Padmasambhava flew into the cave from Kurtoe Singye Dzong in eastern Bhutan, riding on a tigress.

Taktsang is not only a sacred site visited by Guru Rinpoche but was also visited and blessed by many other renowned Buddhist masters; Langchen Pelgi Singye – one of the 25 disciples of Guru Rinpoche in the 8th century, Jitsun Milarepa – famous 11th century yogi, Phajo Drugom Zhigpo – 13th century saint who brought Drukpa school of Tibetan Buddism to Bhutan, Zhabdrung Ngawang Namgyel – the founder of nation-state of Bhutan in the 17th century, Desi Tenzin Rabgay – the fourth administrative ruler of unified Bhutan in the 17th century.

It was fourth Desi Tenzin Rabgay who built the Taktsang monastery in 1694. However, the present monastery you see today is not the original structure. It was destroyed by fire in 1998. His Majesty Jigme Singye Wangchuck, the fourth King initiated and personally supervised the reconstruction of Taktsang monastery to its former glory. It was completed and consecrated in 2005.

Inside one of the temple is a Choeten, a Buddhist stupa built in memory of Langchen Pelgi Singye and holds his sacred body relic. It is believed that the Choeten fulfills wishes if you pray with pure devotion.

Kyichu Lhakhang (Lhakhang means “temple”), which is located just a few minutes drive from the main town of Paro, is one of the oldest monasteries in Bhutan. It is believed to have been built in 659 A.D. by the Tibetan King Songtsen Gampo.

According to the legend, spirit of a giant demoness lay spread across Tibet and Bhutan causing obstruction to the propagation of Buddhism. In order to subdue this demoness, King Songtsen Gampo was required to built 108 temples across the affected region. Kyichu Lhakhang, built to pin down the left foot of the giant demoness, is one of the two temples that were built in Bhutan. The other is called Jambay Lhakhang located in the district of Bumthang in central Bhutan and was built to pin down the left knee. Both the temples were believed to have been built overnight.

The old temple is known as Jowo Lhakhang and holds the original 7th century Jowo Jampa Statue in its inner chapel. Jowo Jampa is a Tibetan term for Buddha Maitreya, the Future Buddha. The outer hall of the Jowo Lhakhang houses the statue of Chenrizig, the God of Compassion, Avalokiteshara.

Next to the Jowo Lhakhang is Guru Lhakhang which was built by Her Royal Grandmother Ashi Ashi Kesang Choden Wangchuck in 1971 and houses the statue of Guru Padmasambhava. Inside this temple is also a statue of her spiritual root teacher His Holiness Dilgo Khentse Rinpoche, a highly accomplished Buddhist master who passed away in 1992. Many important religious annual rites are conducted here at Kyichu Lhakhang under the patronage of Her Royal Grandmother.

Drukgyal Dzong – The Fortress of the Victorious Drukpa

Located about 14km away from Paro main town is Drukgyal Dzong (the fortress of the victorious Drukpa means “people of the Thunder Dragon”Drukpa).

It is not really known who actually built this Dzong. Some believes it was Zhabdrung Ngawang Namgyel while others say it was Desi Tenzin Drukda, the second administrative ruler of unified Bhutan who built it under the command of Zhabdrung Ngawang Namgyel. But it is a known fact that it was built in 1649 to commemorate victory against the invasion by Tibetan-Mongol forces.

The Dzong was almost completely destroyed by fire in 1951. Some of the main relics including invaluable volumes of sacred Buddhist scriptures were rescued. The dzong used to house one of the largest granaries among all the dzongs in the country. Apart from the sacred Buddhist scriptures, some of the original relics rescued from the fire are an image of Chenrizig, the god of compassion; an image of Zhabdrung Ngawang Namgyal and Dolma (Tara).

The Dzong remained in a ruined state since the devastating fire in 1951. The reconstruction of the Dzong began in 2016 under the command of His Majesty the King and it is expected to take few years before restoring to its former glory.

Tamchog Lhakhang is a temple dedicated to the 15th century Tibetan saint Thangthong Gyalpo popularly known as the iron bridge builder. It is located across the Pa Chhu river along the Paro – Thimphu highway. To visit the temple you will have to cross an iron chain bridge over the Pachu river, one of the very few remaining of the many built by Thangthong Gyalpo.

This is a private temple owned by the direct descendants of Thangtong Gyalpa. However, tourists are allowed to visit if they are given permission. Crossing this very old bridge with its swaying and undulating movements can be quite an experience. The temple’s location on the ridge and the high rocky barren hills which serve as it’s backdrop makes this a good location to take pictures.

Dungtse Lhakhang (lhakhang means ‘temple’) is located on the other side of the Paro Chhu river about 5 minutes drive from the main Paro tow. It was built in the 14th century by the Tibetan Saint, Dupthop Thangtong Gyalpo, who was popularly known as Chagzampa which means ‘Iron Bridge Builder’. Dupthop Thangtong Gyalpo was not only a great Buddhist scholar but also a great Iron Bridge builder. He built about eight iron chain bridges across Bhutan, though the bridges are no longer in use today, one can still see remnants of some of the bridges. It is said that he built this temple to protect the people in the valley from being afflicted by leprosy.

Sangchoekhor monastery is located on a hilltop ridge overlooking the Paro Valley. It takes about 30 mins drive from the main Paro town to reach the monastery. Sangchoekhor monastery is also known as Sangchoekhor Dzong because of its past connection with Zhabdrung Ngawang Namgyel, a Tibetan Buddhist master who came to Bhutan in 1616 and unified Bhutan as one nation-state. Dzong means ‘Fortress’ and is the main establishment of Zhabdrung Ngawang Namgyel. The original Dzong was burnt down by a fire in 1932. It was later reconstructed at the initiative of the Chamberlain of Paro Penlop (governor of Paro). Today the monastery is turned into a Buddhist college with more than 100 monks studying Buddhist philosophy.