When you book with an account, you will be able to track your payment status, track the confirmation and you can also rate the tour after you finished the tour.
Sign Up

Or Continue As Guest

When you book with an account, you will be able to track your payment status, track the confirmation and you can also rate the tour after you finished the tour.
Sign Up
2398

WHY BOOK WITH US?

Book and Choose to Pay Later

The booking form is highly encrypted and transmitted securely with an SSL protocol.

We will get back to you right away with any applicable discounts and other details including options to pay through direct bank transfer or through our highly secured payment gateway.

Do not hesitate to contact us. We are here to help you plan an amazing trip to Bhutan and will be more than happy to talk to you.

There’s nowhere quite like Bhutan. The tiny Buddhist Kingdom, squeezed between India and China, is cautiously embracing modern development guided by the philosophy of Gross National Happiness while still preserving its age-old tradition and ancient culture.

Perfect for discerning travellers with a limited time frame to get away from busy materialistic city life into the pristine natural environment, stunning landscapes and get pampered with Bhutanese hospitality. This 4 Days 3 Nights journey will take you to remote monasteries and encounter the mindful Buddhist way of life that earned the country its nickname ‘Kingdom of Happiness’. On the 2nd day of this trip, you will hike to the famous Paro Taktsang or Tiger’s Nest built on the face of the 800m rock cliff.

All tour services we provide are independent with flexible itineraries which can be customized to suit your interest and requirement.

On your arrival at Paro International Airport, our guide and the drive will receive you. You will cover the following activities on your first day.

Note: The coverage on the first day depends on your flight arrival time. If the below sites cannot be covered on the first day, we will try to make it up on 3rd day of your trip.

Located in Paro just above the Rinpung Dzong (administrative headquarter of Paro district), the National Museum of Bhutan is housed in an ancient watchtower called Paro Ta Dzong (Ta Dzong means “watchtower fortress”) built in 1649. It displays hundreds of ancient Bhutanese artifacts and artworks including traditional costumes, armour, weaponry and handcrafted implements for daily life. The collection at the National Museum preserves a snap-shot of the rich cultural traditions of the country.

Rinpung Dzong which literally translates to “fortress of the heap of jewels” was built by Zhabdrung Ngawang Namgyel in 1646 and established as the administrative and monastic center of the western region. Today, the Dzong serves as the office of the governor of Paro district and head of the district monk body in Paro. A great annual festival known as Paro Tsechu is held in Rinpung Dzong from the eleventh to the fifteenth day of the second month of the traditional Bhutanese lunar calendar (usually in March or April of the Gregorian calendar). On this occasion, holy images are taken in a procession followed by a series of traditional mask dances conveying religious stories that are performed by monks for five days. After visiting the Dzong, take a short walk to the traditional wooden cantilever bridge called Nemeyzampa, where your driver will be waiting for you. The roofed wooden cantilever bridge is built in a traditional style and this type of bridges are called Bazam. After lunch in Paro, transfer to Thimphu.

Thimphu is the capital city of Bhutan and it is home to approximately 100,000 residents. This bustling little city is the main centre of commerce, religion and government in the country. It is the only capital city (actually the whole country) in the world without traffic lights and even commercial billboards.

On arrival in Thimphu, visit the Weaving Center to get insights into the weaving culture and tradition of the Kingdom of Bhutan. You will see women at work weaving simple plain textiles to one of the most intricate designs and patterns of traditional Bhutanese attires all handwoven.

Today, you will hike to the famous Tiger’s Nest and later in the afternoon, drive to Thimphu, the capital city of Bhutan.

After breakfast, you will do sightseeing in Thimphu and then after lunch, transfer back to Paro.

The magnificent 169 feet tall bronze statue of Lord Buddha is located at Kuensel Phodrang, a hilltop overlooking the Thimphu valley.  From here you can see a nice view of Thimphu city. It was built to celebrate the 60th birth anniversary of the Fourth King His Majesty Jigme Singye Wangchuck and also for the purpose of bringing peace in the world.

Visit the Institute of Zorig Chusum whrere the 13 traditional arts & crafts of Bhutan are taught. If the class is in session, you can hop in and observe while the students gets hands-on training. Opens during working weekdays & on Saturdays 10am – noon.

After lunch at the Folk Heritage Museum Restaurant, drive to Changlimithang Archery Range to witness the game of archery if the match is in progress. You will see archers dancing and singing each time the target is hit from a distance of 145m. Archery is the national sport of Bhutan

Transfer to Paro and visit one of the oldest temples in Bhutan – the 7th century Kyichu Lhakhang which believed to have been built by the Tibetan Kind Songtsen Gampo in one day. Kychu Lhakhang is the national treasure of Bhutan.

Today, on the 3rd day of your trip, you will hike to the famous 17th century Paro Taktsang Monastery popular known as the “Tiger’s Nest”. Originally built in 1692, the iconic sacred site Taktsang is perched on the 800m rock cliff and it is the most visited place in Bhutan. The round trip hike takes about 4-5 hours for most visitors. After lunch at the Taktsang Cafeteria, descend back to the base and drive to Paro town and spend some leisure time.
Later in the afternoon, visit a beautiful traditional farmhouse for an authentic dinner comprised of homecooked local cuisine. You can also soak up in the therapeutic traditional hot stone bath for an additional fee of about US$15 per person.

Day 4Drive to Paro for Departure

After breakfast, transfer to Paro International Airport for your onward journey. Your guide will assist you to complete all exit formalities before you check-in.

All tour services we provide are independent with flexible itineraries which can be customized to suit your interest and requirement. You can form a group to get discounts. Apart from the predesigned packages which have proven successful, Bhutan Acorn Tours & Travel can also arrange the following add-on activities to enrich your experiences in Bhutan. These activities can be fitted into any tour itineraries.

Please note that some of the activities may involve extra fees.

All your deposits and any payment less administrative fees of US$100 per person will be refunded if you notify us at least 30 days prior to your arrival date. Refer the cancellation fee schedule below to determine the applicable charges:

In case the trip is cut short or duration lost due to unforeseen reasons after arrival in Bhutan, no refund is available as the payment would have been already made to hotels and other logistics.

There shall be no charges for the number of days of delay either during arrivals or departures or both, due to weather conditions, communication problems, cancellation or delay in Bhutanese airline flights, sickness or any other legitimate reason as Tourism Council of Bhutan (TCB) may deem reasonable. However, the Tourist will be charged on the actual expenses on accommodation, food, transport and any other services provided. 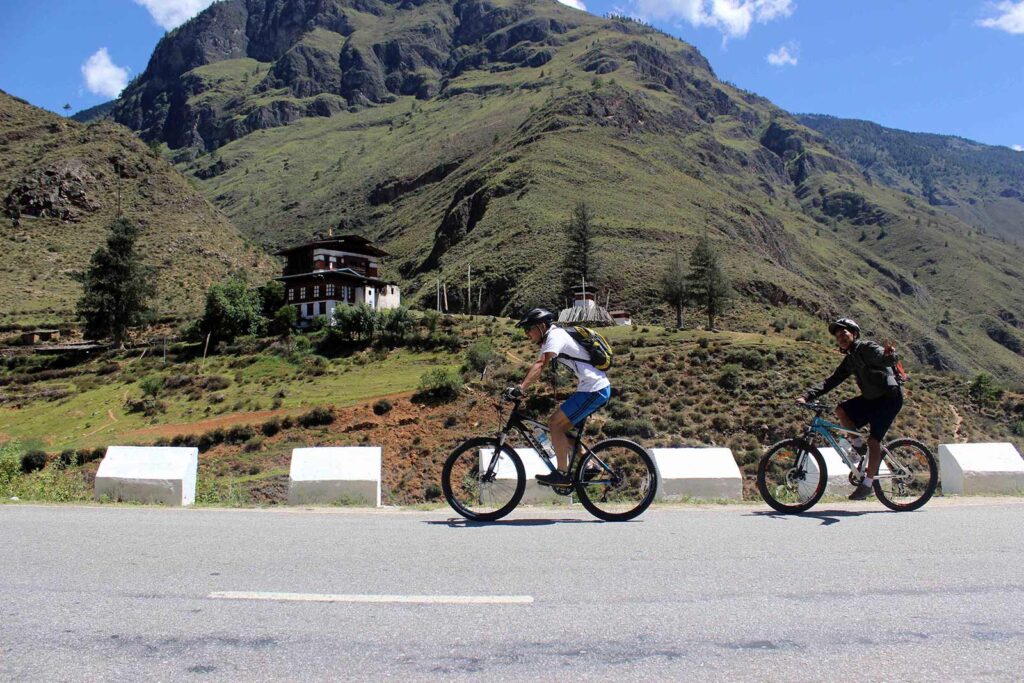 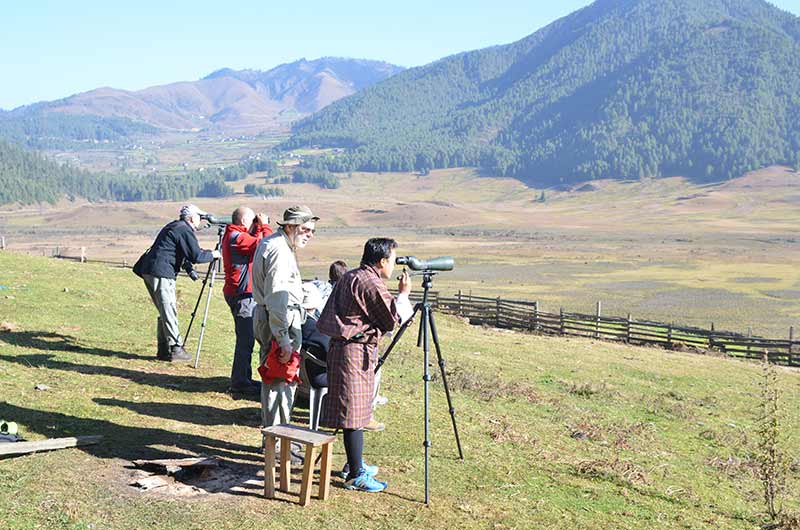 A Cultural Journey With Trekking in Central Bhutan 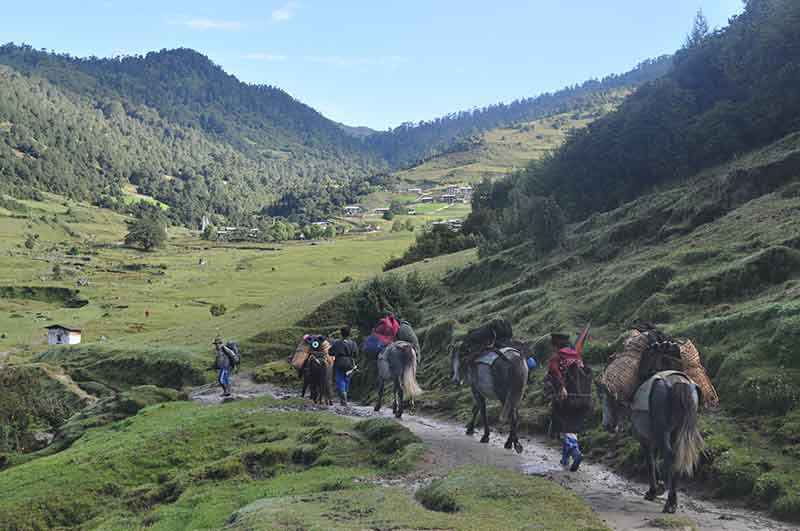